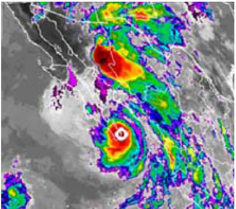 This research continued in SGP-CRA 2048, with the same title

The Eastern Pacific has the highest density of cyclones worldwide, and upon landfall they often produce catastrophic rains, flooding and landslides. The Mexican Meteorological Service and the US National Hurricane Center (NHC) issue forecasts of track and intensity for tropical cyclones, which help emergency managers prepare warnings for the public. Accuracy and reliability need to be improved for effective disaster prevention and this project seeks to identify model and data needs for improved forecasts.

Goals
Improve the understanding of tropical cyclone intensification and evolution in the East Pacific through observations and model simulations, and identify potential global warming effects on cyclones

First results
Results provide evidence of the role played by atmospheric circulations as important determinants of storm tracks and rainfall over the region. Cyclone intensity depends on mass and energy budgets in the atmosphere and how they interact with the ocean. Circulation speed increases a cyclone’s (destructive) energy; surface friction decreases it.

The study of three tropical cyclones that made landfall over northwestern Mexico showed that “external” factors such as the inflow of warm dry air from the western United States need to be understood for better track prediction in the Eastern Pacific.

The project has started to build a data base of historical records using newspaper articles and government reports and that has allowed to identify and document past cyclones that made landfall over the Mexican Pacific States.

Over 100 students were trained in three successful courses on the theory and practice of identification and evolution of tropical cyclones.

First results have improved the team’s knowledge of cyclone evolution. They have also shown that hurricane science needs to be further developed.