Tropical Storm Harvey strengthened into a hurricane over the Gulf of Mexico last week and made landfall northeast of Corpus Christi, Texas at around 9:45 p.m. on Friday. The catastrophic flooding that followed in Houston and other parts of the state is a reminder of the need for science to provide the means to understand, predict and prepare for such natural disasters. Investigators involved in an IAI Collaborative Research Network project, Dr. Kam-biu Liu and Dr. Nina Lam from Louisiana State University, have used innovative research to compile a detailed track record of hurricanes past.

Dr. Nina Lam has conducted coastal vulnerability and disaster resilience work in the US and in the Caribbean region and has just published an article at The Conversation on this work. Dr. Kam-Biu Liu, an expert in paleotempestology, i.e. the study of past cyclones by analyzing coastal lagoon sediments, isotopic records from stalagmites, tree-rings and corals, who studied the variability of Caribbean hurricane activity, knows that a long-term record is critically important to more effectively explain current extreme events.

“Extreme events like Harvey-whether it’s the almost 210 km/h wind or the above 760 mm rainfall- are extremely rare; some say it’s a 500-year event. That’s why we need geological data spanning hundreds to thousands of years to put these very rare extreme events in historical context”, Dr. Liu points out.

“Paleotempestology is a young field of science that can deliver this kind of geological records of past hurricane activity based on scientific studies of coastal sediments, cave deposits, and tree rings. Data from paleotempestology can also reveal the relationship between climate change and global or regional hurricane activity. For example, many people wonder whether strong hurricanes will become more frequent by the end of this century as a result of global warming. One way to answer this question is to find out from the geological record if intense hurricanes were indeed more frequent going back to the Medieval period about a thousand years ago, when temperatures in many places in the world were somewhat warmer than the present. Insights gained from this long-term perspective can help us better understand the climate sensitivity of extreme events like Hurricane Harvey, and consequently better predict the future”, Dr. Liu adds.

To read more about Dr. Lam’s work and IAI research on tropical cyclones please also visit the projects on Paleotempestology of the Caribbean region and on Landfalling tropical cyclones in the Eastern Pacific basin 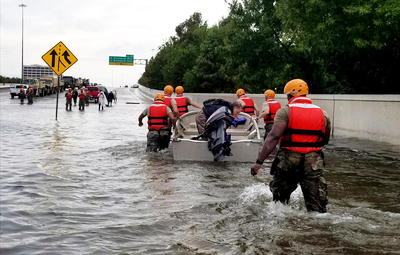 Soldiers with the Texas Army National Guard move through flooded Houston streets as floodwaters from Hurricane Harvey continue to rise, Monday, August 28, 2017. More than 12,000 members of the Texas National Guard have been called out to support local authorities in response to the storm. (U.S. Army photo by 1st Lt. Zachary West)