Tree rings point to drought as trigger of social conflict

The black tree-ring index graph shows the variations in the annual growth of Polylepis tarapacana. The broken-line black box in the graph encloses an extensive drought period (1316-1371). The driest intervals are turquoise. The red line is a 25 year average of tree-ring widths and shows long-term trends of rainfall. Blue and green histograms show the probable calendar year of the radiocarbon dates (p=95%) of charcoal from domestic hearths and constructions timbers found in “vulnerable” and “fortified hilltop” (Pukara) villages in the Bolivian Altiplano. The transition to protected settlements coincided with the long drought that started in 1316.

Tree-ring widths of Polylepis tarapacana vary consistently with yearly rainfall on the Bolivian Altiplano. This allowed IAI researchers to reconstruct annual precipitation back to 1290. Tree rings -a proxy for annual rainfall- revealed severe, long droughts in the 14th century. Radiocarbon dates of constructions in the Bolivian Altiplano show that the transition from vulnerable to fortified villages coincided with one of the driest periods, suggesting that droughts triggered social conflict, over scarce water for consumption and irrigation.

Although 20th century droughts were not as severe as those in the 14th century, warming on the Altiplano is reducing glaciers and changing water availability. Climate change and increasing water demands by expanding mining and agriculture together with fast population growth will increase the risk of future water shortages on the Altiplano. These changes need to be anticipated to reduce vulnerability and potential conflicts, and distribute water equitably. 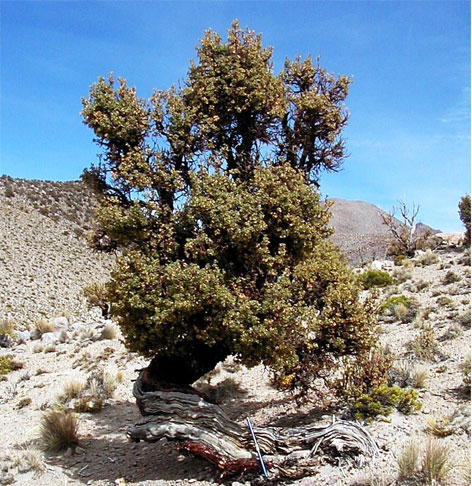 Water shortages affect human activities and reduce the vital ecosystem services that water provides, limiting socioeconomic development. Tropical high-altitude regions, such as the tropical Andes, are particularly vulnerable: since the 1950s the Altiplano has seen persistent warming and an unprecedented, sustained glacier shrinkage. These changes coincide with a growing water demand from increasing populations, agriculture and mining.

To understand past effects of climate changes on human populations, scientists develop proxy climate records that characterize the past variations in temperature and precipitation at the regional scale. Tree-ring analysis provides proxy climate records that are precise to the year. Polylepis tarapacana is a small tree growing at elevations of 4,500-5,000m on the Altiplano of Bolivia, Chile and Argentina.

Studies in the IAI CRN 2047 project by Mariano Morales, Ricardo Villalba, Duncan Christie, Jaime Argollo, Claudia Soliz and others have shown that tree-ring growth of Polylepis taracapana is highly sensitive to rainfall. Sampling of Polylepis tarapacana at sites between 17-23˚S has allowed the team to develop a 700-year-long regional chronology for the southern Bolivian Altiplano. This important development has revealed a history of severe droughts: the narrowest rings in the regional Polylepis chronology (see front page graph) represent one of the most severe droughts in the past 700 years. These droughts followed a relatively wet period late in the 13th century, which will have been favorable for agriculture.

Recent archeological research, led by Axel Nielsen (CONICET, Instituto Nacional de Antropología y Pensamiento Latinoamericano, Argentina), has shown that ‘vulnerable’ villages on the valley floors were abandoned in the 14th century in favor of fortified, defendable sites on hilltops (Pukaras). He suggested that persistent droughts destabilized the local economy, based on dryland agriculture and herding and led to conflict between neighboring communities over access to the scarce irrigated lands with the consequent need to move to fortified sites. The drought initiated in 1316 is the longest drought period recorded in the past 700 years and coincides with the shift of these Pre-Inca villages from vulnerable to fortified hilltop sites. Thus, the tree-ring evidence supports Nielsen’s archeological hypothesis on environmental conflict.

In the 21st century, warming climate together with increasing water demand will likely increase pressure on the water resources of the Altiplano leading to political and economic conflict. Water managers must plan to reduce these vulnerabilities and ensure sufficient and equitable water supply under future scarcity.