The IAI project on the variability of ocean ecosystems around South America (VOCES) at the poster session of RD9 @SBSTA 46, under Theme 1: Regional climate research data and information, and gaps

Marine ecosystems are under increasing stress of natural and anthropogenically induced climate variability. IAI’s multinational, multidisciplinary network VOCES assesses the impact of such climate variability on the Humboldt, Patagonia, and South Brazil Large Marine Ecosystems. These ecosystems are among the most productive of the southern hemisphere, sustain more than 20% of the global fish catch, host unique biodiversity and absorb CO2 at rates comparable with the most significant uptake regions in the ocean as for instance the northern North Atlantic.

In an international coordination and cooperation framework, scientists, educators and students from Argentina, Brazil, Chile, Peru, Uruguay and the United States work to provide tools to understand the physical and biological variability in ocean ecosystems. These tools will allow researchers to better map the response of marine life from primary production to fisheries in the Humboldt Large Marine Ecosystem after 2015-2017 El Niño impacts.

The very intense 2016-2017 El Niño is the ideal scenario to illustrate how to apply the analysis methods developed for the Patagonian Large Marine Ecosystem to better understand the Humboldt Large Marine Ecosystem. There is increasing evidence suggesting that decadal oscillations of marine ecosystems are correlated to similar climate variations. The knowledge generated by VOCES on the physical, biological and bio-geochemical mechanisms that regulate these complex ecosystems may be useful to inform decision-making in the fisheries and other relevant sectors.

Sara Purca, a Peruvian researcher of the IAI project, presented her poster on 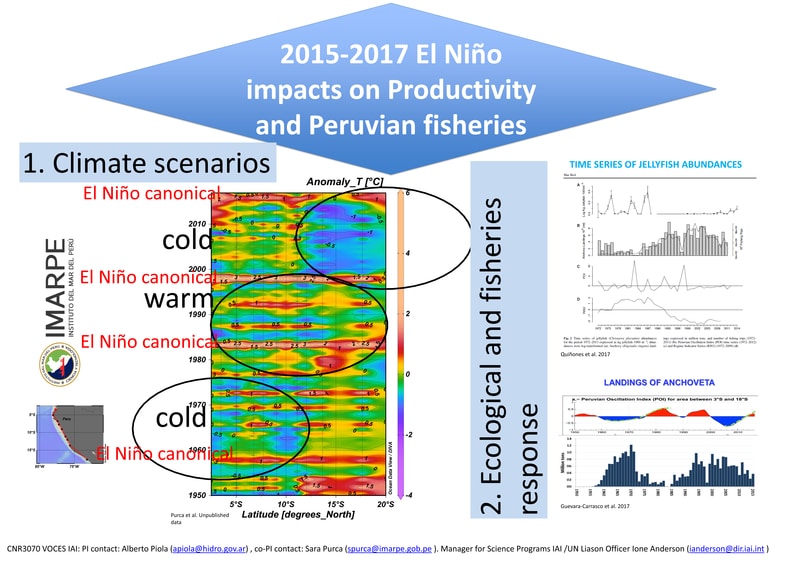 (see the agenda and posters here)