Population impact from tropical cyclones in the Eastern Pacific basin

Today, as one of the most powerful hurricanes ever recorded in the Atlantic Ocean approaches Puerto Rico, the Intergovernmental Panel on Climate Change (IPCC) begins to discuss the outline of the Sixth Assessment Report (AR6) in Montreal, Canada. Assessments of climate change by the IPCC involve hundreds of scientists around the world many of who have been actively involved in IAI research networks in the Americas. IAI is participating at 46th Session of the IPCC with a view to strengthening participation of scientists from Latin America in future assessments to provide the scientific information needed for national action in IAI Member Countries and international policy discussions under the Paris Agreement.

Since late April 2017 to August 29, a total of 21 named tropical cyclones have developed in the basins that surround North America: nine in the north Atlantic and twelve in the eastern Pacific Ocean. We’ve asked investigators Graciela Binimelis de Raga, Kam-Biu Liu and Nina Lam from IAI CRN2 Networks for their comments on recent hurricane activity impacting the region.

Since late April 2017 to August 29, a total of 21 named tropical cyclones have developed in the basins that surround North America: nine in the north Atlantic and twelve in the eastern Pacific Ocean. Three of them made landfall in coastal areas of the Gulf of Mexico: Cindy in Louisiana (United States) as a tropical storm, Franklin as a category-1 hurricane in Veracruz (Mexico, after having crossed the Yucatán peninsula) and Harvey, first also impacting the Yucatán peninsula as a tropical wave and then in Texas (United States) as a category-4 hurricane with sustained winds up to 215 km/h (Fig. 1). As is well known, Harvey triggered heavy rainfall with total accumulations above 1,000 mm, well beyond any previous events, resulting in widespread flooding over extensive areas. A few days later, another storm made landfall in the Baja California Peninsula (northwestern Mexico) along with heavy rainfall. 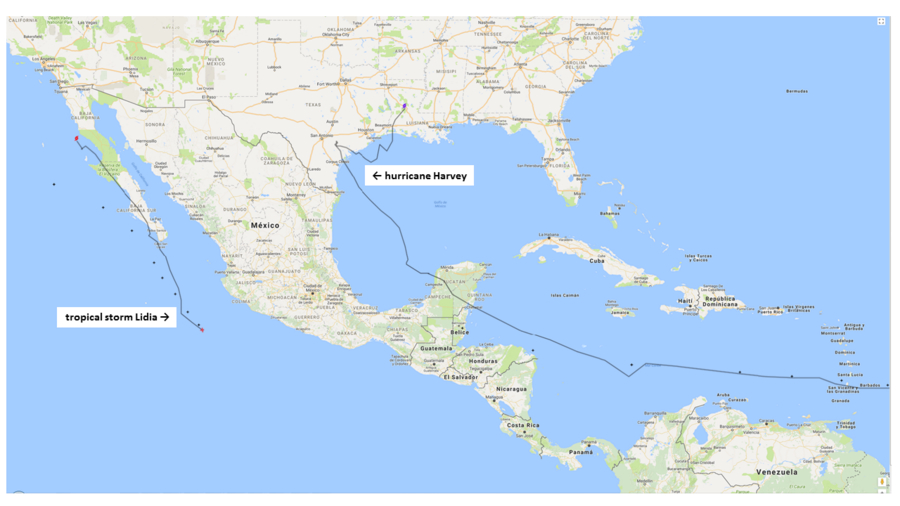 As part of our IAI research project on Landfalling tropical cyclones in the Eastern Pacific basin, we evaluated the impacts from tropical cyclone landfalls on populated areas located along the western coast of Mexico. Strong winds and heavy rainfall lasting for several days were associated with property damage and loss of lives for all the cases analyzed. More than 30 landfall events were examined from disaster estimates based on the affected population between 1970 and 2010. Each event resulted in affected populations that ranged from 20,000 to more than 800,000; the latter figure is associated with hurricane Pauline that made landfall in October 1997.

Pauline’s track was parallel to the coast for at least 24 hours over the southern states of Oaxaca and Guerrero (red line, Fig. 2), characterized by complex topography. Moreover, the storm center passed close to Acapulco, a highly-populated area with 690,000 inhabitants in 1995 and the weather system produced relatively large rainfall (300-400 mm total, registered at different weather stations) resulting in at least 100 deaths. In contrast, even though relatively large rainfall accumulations (300-700 mm) are linked to landfalls in Baja California, this region has experienced limited impact due to its low population density. Only Liza, a category-4 hurricane in 1976 while crossing the Gulf of California, resulted in a large death toll (600) associated with the catastrophic failure of the dam of a water reservoir close the city of La Paz.

More recently, in the 2011-2015 period, 85 tropical cyclones developed in the eastern Pacific basin with more than 10 landfalls in Mexico. In 2013, hurricane Manuel (category-1; blue line Fig. 2) became the deadliest, responsible for 169 deaths and 105,000 affected mostly in the state of Guerrero. Rainfall accumulations ranged between 500-1000 mm and areas over the Sierra Madre del Sur Mountains reported landslides as well as flooding in Acapulco. In contrast, category-3 hurricane Odile in 2014 (green line Fig. 2) produced moderate rainfall accumulations (100-500 mm totals) during a 3-day period, but resulted in fewer than 10 deaths related to the system. Strong winds (up to 205 km/h) caused property damage in Los Cabos and the population remained two weeks without electricity. 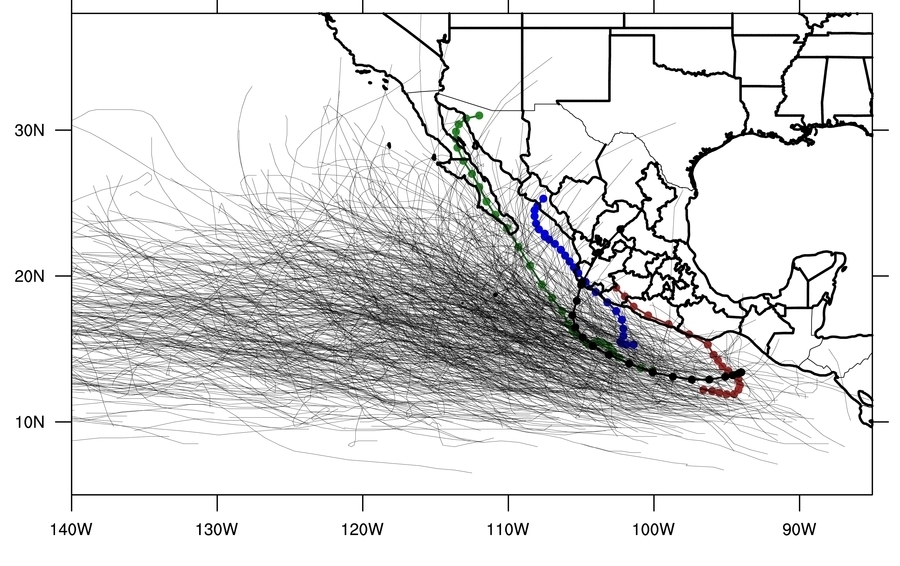 In late October 2015, hurricane Patricia made landfall in the coast of Jalisco (black line Fig. 2), after reaching category-5 strength. Total rainfall ranged between 150 and 350 mm and the intensity decreased almost 200 km/h in a matter of 12 hours while moving over land across several hundreds of kilometers. Based on geostationary satellite-based estimates (Velden et al. 2017), Patricia has been ranked as the strongest storm reported in any cyclogenetical basin worldwide from 1979 to the present. Even though it was such a strong system, its negative impacts on the ground led to only fourteen deaths and 15,000 affected.

Tropical storm Lidia, which made landfall in Baja California (Fig. 3), was the third tropical cyclone to move across Mexico’s west coast in 2017. Heavy rainfall caused significant damage to the infrastructure and at least five deaths in the Los Cabos area. This area is located in the peninsula’s southern tip with population close to 300,000 and home of world-class resorts. Early estimates of the rainfall accumulations are in the range of 400-600 mm and 200-300 mm/day which justify the occurrence of flash flooding in watersheds surrounded by mountains with elevations above 750 meters. One important aspect of this event was the slow formation of a relatively large circulation in the Pacific Ocean which lead to track predictions being issued in less than 72 hours prior to the actual landfall and 48 hours prior to close passage over Los Cabos.

Figure 3. Satellite image from 31 August 2017 in which tropical storm Lidia is located over Los Cabos. The thin line represents the storm trajectory from 29 August through 2 September. Red dots are settlements along the Baja California Peninsula.

While the prediction of tracks has greatly improved during the last few decades, the actual impact while the tropical cyclone makes landfall and affects populations is difficult to forecast. Villages and small communities in the mountains can be highly vulnerable and even moderate rainfall amounts can lead to loss of life due to flooding and landslides. Working with decision-makers, as we have done in Baja California Sur, improves the understanding of the physical phenomenon and provides relevant, timely information for those in charge of coordinating relief efforts. The different levels of preparedness ahead of the impact will make the difference between life and death of those vulnerable populations.