Food from the deep 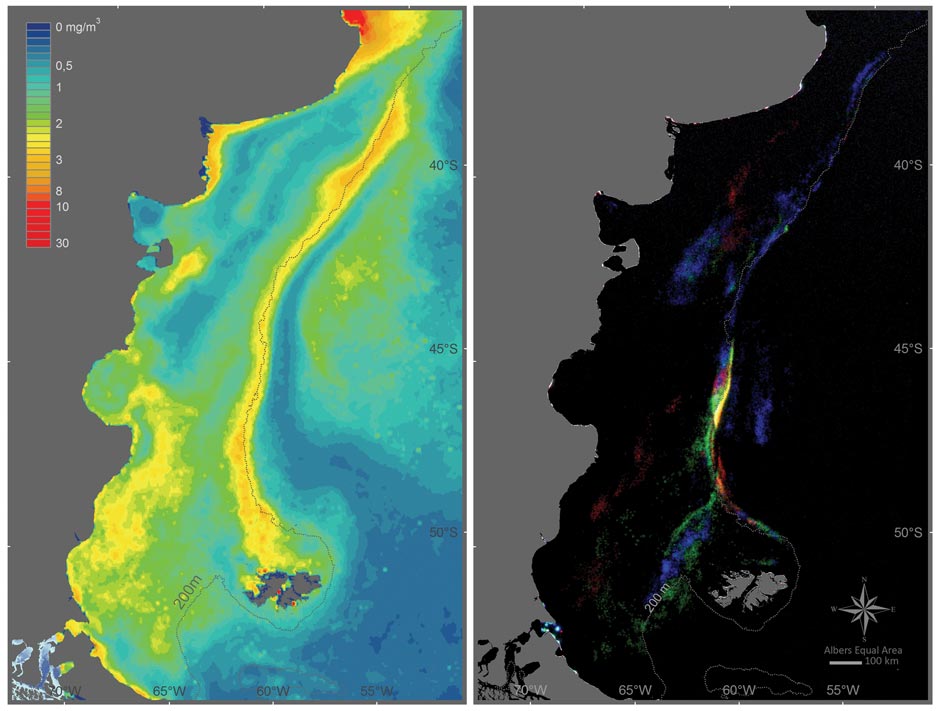 The image on the right was constructed by Valeria Falabella from the Wildlife Conservation Society and the Sea & Sky Project, based on data from the US Air Force Defense Meteorological Satellite Program. The data was provided by Chris Elvidge from NOAA’s National Geophysical Data Center. The image on the left shows the surface chlorophyll concentration in January. It was prepared based on data from NASA’s SeaWiFS radiometer.
Above are two pictures of the Patagonian ocean shelf in the Western South Atlantic. The one on the left shows summer concentrations of surface chlorophyll-a (in milligram per cubic meter of ocean water; estimated from data collected by SeaWiFS, a satellite-borne radiometer), with the yellow and red colors indicating where oceanic biomass is high. The picture on the right shows nighttime lights in the same part of the southwestern Atlantic. The lights are color-coded for three different years: 1995 (blue), 2000 (green) and 2008 (red). These lights along the Patagonian shelf break are generated by ships fishing squid at night.

Upwellings of deep waters support nearly half of the oceans’ productivity and fisheries. Understanding these systems and the associated nutrient cycles and carbon sequestration is critical for understanding global change and may guide international agreements for sustainable fishing.

Unlike other upwellings, the Patagonian shelf upwelling is driven not by winds but by continuous deep ocean currents forcing cool, nutrient rich water to the surface, and enriching waters as far north as Brazil. Nutrients reaching sun lit surface waters fertilize photosynthetic plankton and whole food chains of major economic importance. Part of this biological production also plays a role in the oceans’ function as a sink for excess atmospheric carbon dioxide.

Coastal upwelling regions, where deeper, cooler waters are driven to the ocean surface, occupy only one percent of the total ocean surface, but they contribute nearly half the world’s fisheries’ landing, and a large part of the oceans’ overall production. The South Atlantic Patagonia shelf borders Argentina, it is as large as that country, and the waters of its shelf break provide an important fisheries resource. Scientists in the IAI project found that the Patagonia upwelling, unlike others around the globe, is not driven by winds but by deep sea currents which force the cooler nutrient rich waters up towards the sun light at the ocean surface. There, the waters fertilize photosynthetic phytoplankton which in turn supports a whole food chain: anchovies, hake, hoki, squid and even bottom-dwelling organisms such as scallops, who also concentrate under productive upwelling regions.

Ricardo Matano and Elbio Palma from the IAI project team wrote in a recent scientific paper: “the food supply in the Malvinas region is so plentiful and reliable that elephant seals, which breed and molt on the Argentinean shores, cross the wide Patagonian shelf (about 400 km) to feed there. Unsurprisingly, this region hosts one of the largest fisheries in the Southern Hemisphere. Nighttime satellite pictures … routinely show a dense conglomerate of squid fishing vessels”, where the glare of the squid fishing lights rivals that of the urban centers of Buenos Aires and Montevideo, as can be seen in the picture on the front page. 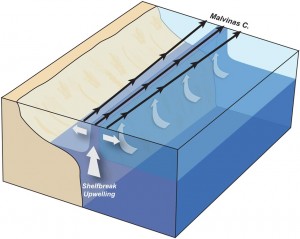 Research worldwide has mostly concentrated on upwellings driven by winds. At the Patagonia shelf, the upwelling mechanism is different. Using knowledge on fluid physics and numerical simulations, the IAI project group showed an “intrusion” of the Malvinas Current onto the shelf that is forced up by the ocean’s bottom topography (see graphic on this page). As the strong Malvinas Current in the Southwest Atlantic flows northward along the continental slope, it generates a pressure gradient along the shelf edge that drives currents in the direction of the shore, which is compensated by an upward flow – the upwelling – along the shelf’s edge. The Patagonia upwelling is of the same order of magnitude as wind-driven upwelling systems. But wind-driven systems, such as those on the Oregon or California coasts, last only a few days or weeks while the right wind blows. The upwelling on the Patagonian shelf is active all year round – with important implications for the mechanisms that sustain plankton production, fisheries, and also oceanic carbon sequestration.

Although the northern limit of the Patagonia shelf break upwelling and its underlying Malvinas Current is at 39ºS, the numerical simulations show that its influence on the shelf spreads inshore moving nutrient-rich shelf waters, together with the waters from the Rio de la Plata along the coasts of Uruguay and southern Brazil where they support rich fisheries.

Global Change Science Snapshots are intended to inform IAI clients and the interested public about important results of international research carried out under IAI auspices.