Shallow groundwater and agricultural land management in the Pampas 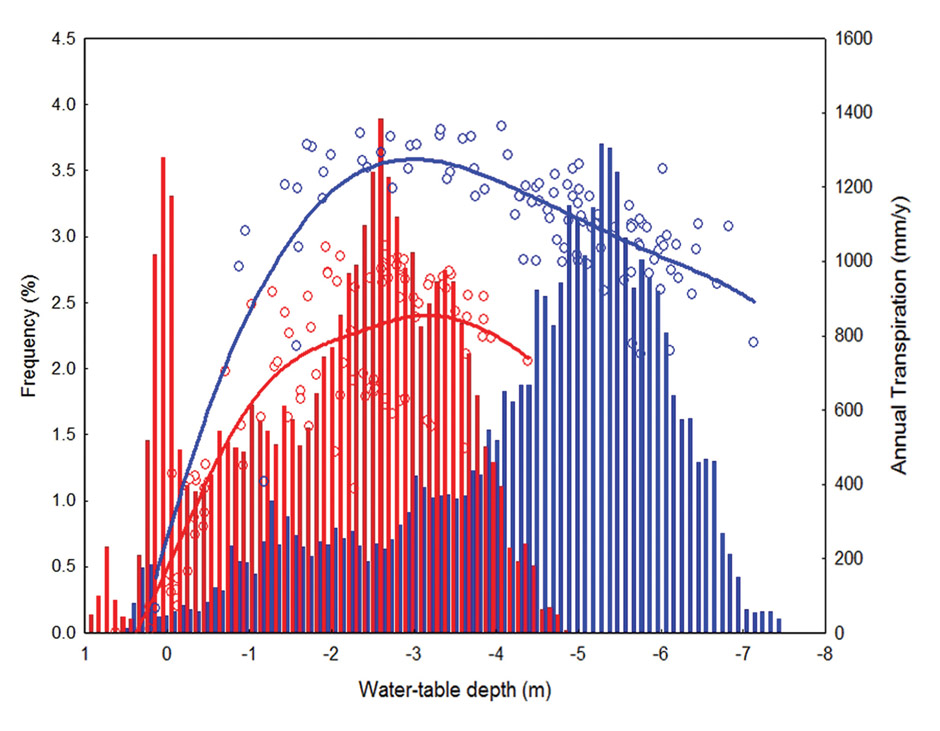 This figure shows annual transpiration rates in the Argentinean Pampas (circles and lines) under two land uses: perennial alfalfa pasture, widespread until the early nineties, and annual wheat-soybean-maize rotations, the dominant land use today. Transpiration rates (right-hand axis) are higher under pastures than under annual crops (1200 vs. 800 mm/year, on average). A 100-year simulation of the depth to the ground water-table under these regimes of evapotranspiration is shown by the bars whose height indicates how often in these 100 years a given groundwater level is reached (frequency on the left-hand axis). The model shows that pastures maintain ground water tables more commonly at greater depths (average -4.4 vs. -2 m) and result in less frequent flooding (2 vs. 47 events).

In the flat landscapes of the Pampas, shallow groundwater can waterlog soils making them unsuitable for crop production. In wet years, it can reach the surface causing floods. When maintained at deeper levels, groundwater acts as a reservoir that supports crop yields even in dry years. The balance between water loss by plant transpiration and its accumulation in shallow groundwater is affected by farming decisions. Understanding water partitioning between plants and groundwater can guide decisions on planting cover crops to manage groundwater. Landscape zoning to exclude vulnerable areas from annual cropping can maximize agricultural benefits from groundwater while minimizing flood risk. Land use decisions need to consider the fate of water in the landscape to improve productivity and benefit from ecosystem services.

The flat sedimentary soils of the Pampas store rainfall surplus of wet years as groundwater. If such surpluses increase, the groundwater table can become so shallow that the land floods. Cyclic floods have taken several years to develop and retreat. The most recent 1997-2003 flood covered 27% of the western Pampas as average groundwater levels rose 2.3 meters, causing great economic loss. This cyclic flooding, which affects 16 million hectares of land, is often attributed to rainfall variations, but a team led by Esteban Jobbágy at the Faculty of Agronomy, University of Buenos Aires, found that land use plays a critical role. Different plants use different amounts of water, and under annual crop production, fields remain bare without any plant water use for part of the year. Deep-rooted, year-round alfalfa keeps soils drier while rotating grain crops let surplus water accumulate. Each crop also has an optimum range of groundwater levels at which it grows best. Outside that range, stress from either drought or water-logging will reduce productivity. As stress from water logging shuts plants down, water use is reduced and flooding becomes even more likely.

In the early nineties, it became more profitable to grow grains than to produce meat. Widespread soybean-wheat-corn rotation, grown year after year, increased flooding frequency and reduced both the number of years and the area suitable for farming. The team therefore explored land use alternatives within a grain production system using a simple simulation model, field observations of groundwater use and depth, and interviews with farmers.

Frequency of waterlogging can be reduced and the number of years suitable for farming increased by 40% by planting pastures or cover crops (alfalfa, ryegrass) tolerant to water-logging during periods of high flood risk. These crops are productive and their transpiration helps keeping the water tables down.
A new, flexible groundwater-based decision making strategy is now being adopted by farmers, accompanied by a collaborative web-based groundwater monitoring initiative (link below). As part of the partnership developed with scientists, farmers provide detailed yield maps and observations of water table.