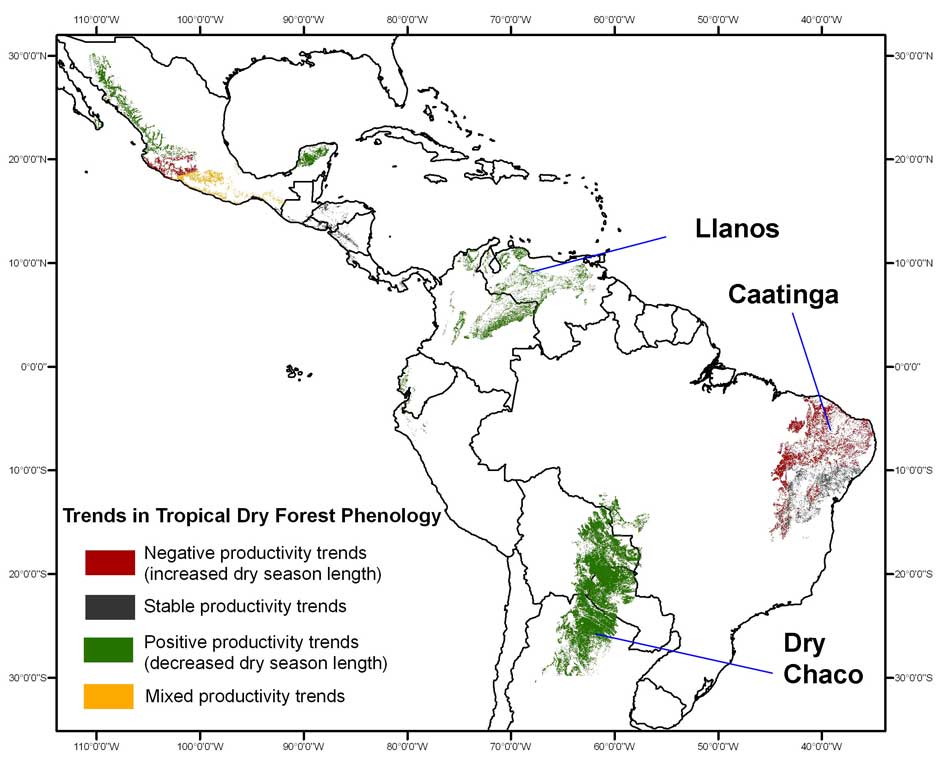 This map shows trends in productivity of tropical dry forests of the Americas between 1982 and 2006, derived from satellite images. Changes in productivity in these endangered ecosystems are revealed by phenological variables, such as the beginning of leaf flush and the length of the growing season before leaf fall. Results demonstrate that forests in the Llanos of Venezuela and Colombia, in some Northern Mexican ecoregions, as well as in the Chaco of Argentina and Bolivia have increased their productivity, while other Mexican regions and the Brazilian Caatinga are losing productivity. Both responses are likely a reaction to global warming, which changes the rainfall and moisture regimes and hence, productivity. (The map is based on a vegetation indicator (NDVI) time series derived from a satellite sensor (MODIS GIMMS AVHRR), processed with TIMESAT, a software for phenological season modeling, and a Mann-Kendall statistical trend analysis.)

Only 40% is left of the original extent of tropical dry forests in the Americas. But only 4.5 % of tropical dry forests (23,417 km2) are currently protected in national parks and biological reserves, mostly in Bolivia and Brazil. Other countries, with large, threatened dry forest areas need to better protect their forests. The maps now available help understanding trends in forest growth, identifying the most vulnerable areas and developing regionally adapted responses.

Preservation efforts for tropical dry forests need to address the forests’ multiple benefits. These include the remarkable biodiversity and important ecosystem services. In addition to parks, other protection schemes such as payments to land owners for avoided deforestation are needed, and sustainable land management in tropical dry forests must be supported with economic and fiscal incentives.

The tropics are much more than ‘just’ rainforests. While rainforests receive much attention for being threatened ecosystems, many tropical dry forest areas are under much greater threat. Their open, park-like character has invited extensive colonization. They are seen by many as non-essential ecosystems that can be transformed into agricultural land at no ecological costs. This attitude should change. Tropical dry forests occupy 42% of the tropical forest area worldwide. Their biodiversity is similar to that of rainforests, and they provide hydrological and climate regulation and carbon storage.

In the Americas, tropical dry forests extend over 520,000 km2. Including forests in other arid and semi-arid environments and savanna ecosystems increases the total area of dry forested ecosystems to about 1,070,000 km2, about 12 per cent of the Amazon forest area. Mexico contains the largest portion (38%) of the neotropical dry forest area, with numerous different dry forest ecoregions. Bolivia and Brazil follow. The size of those forest patches matters, as larger contiguous areas preserve the integrity of species assemblages better. On the other hand, the high fragmentation of dry forests in Guatemala, Nicaragua, Ecuador, Costa Rica and Peru represents a higher risk of disturbance and extinction there.

The IAI-supported TROPI-DRY project team, led by Arturo Sánchez-Azofeifa of the University of Alberta, Canada, studied growing season length and productivity in tropical dry forests. Using satellite-based Normalized Difference Vegetation Index (NDVI) time series, they detected statistically significant trends in three phenological variables: length of dry season, length of the growing season, and total productivity. The results show a declining growing season and productivity in some forests, which reduces stand biomass, carbon storage and water retention. This trend may be linked to global warming, and could lead to considerable pressure on water resources for agriculture and tourism in Northeastern Brazil and Southern Mexico. It could also result in more forest fires, desertification, habitat loss and species migration. If land cover changes occur over large areas, this can affect the regional climate because cooling mechanisms such as evapo-transpiration and albedo (reflectance) from vegetation are weakened. Extensive droughts, attributed to this effect, have recently been observed in Mexican tropical dry forest regions.

In contrast, dry forests in Venezuela, Bolivia, Paraguay, Argentina and Northern Mexico showed a longer growing season and increased productivity. This may on first sight seem positive, but the scientists are concerned that higher productivity may invite land users to intensify agriculture and deforestation. Such landuse changes may initiate desertification processes, resulting in the spread of cactus and agave species in former forest areas.
Productivity will be an important aspect to be considered if REDD+ schemes (international agreements to Reducing Emissions from Deforestation and Degradation in Developing Countries) are to be realized. But as these forests provide important ecosystem services, the benefits of protecting tropical dry forests go far beyond carbon sequestration. Multiple forest uses have to be harmonized through ecological payment schemes and sustainable land management if conservation is to be successful. Furthermore, land management outside of reserves and parks needs to become more sustainable, to protect, maintain and enhance ecosystem functioning also in those areas.