THE HERE-AND-NOW OF CLIMATE CHANGE ADAPTING TO CHANGING SEASONALITY

Climate change is often discussed in terms of the future: emission scenarios for greenhouse gases are translated into global warming gures that typically predict several degrees of warming some time in the second half of this century. In the present, climate change has increased the average global temperature by 0.7°C, a number that results from a complex analysis of the hugely variable temperature records around the globe. Paradoxically, to show the global nature of climate change, the multitude of climates and weather patterns around the globe had to be reduced to that one number, less than one degree which in everyday experience would not appear to be a reason for alarm or suggest a need for adaptation. As a result, adaptation to change and mitigation of emissions and consequent change appear less urgent than they are.The political controversy surrounding climate change has arisen in this global context often without considering the “here and now” of changing climates. One such change is much more tangible and is already part of the real experience of many people in many regions: the seasons are changing. Earlier springs with earlier snow melt and spring rains that fall on snow, moister dry seasons, skiing seasons that start late, trees that blossom a week earlier; these are some of the many subtle shifts that already accompany climate change.
The IAI, together with the US National Center for Atmospheric Research (NCAR) and Argentina’s Institute for Environmental Science, Snow and Ice Research (IANIGLA) invited 47 young scientists from 14 countries in the Americas and from many scienti c disciplines to examine seasonality. The scientists provided accounts of their own research experience of how seasons change and how societies need to react and adapt.

People are used to divide each year into seasons, cyclical changes of weather, temperature, precipitation, wind, and daylight. Seasons determine patterns of water availability, food production, health, the economy, social life and culture. In many regions seasons are changing. The human capacity to bene t from or cope with changes in seasonality depends on knowledge, access to information and resources as the examples below illustrate.

CHANGING RAINFALL INCREASES THE THREAT OF LAND DEGRADATION IN CUBA

Only 20% of the mountainous Cuyaguateje watershed in Cuba is used for arable agriculture: tobacco, vegetables and grains produced by both small and large scale farmers. Like in many regions, the rainy season has changed slightly over the past 50 years. The average rainfall in the 1960s was 1560 mm per year, while after the 1980s the average is 1810 mm. This increase of only 16% has increased the rate of erosion in the watershed by 50 percent. Rains are still concentrated in the wet season from May to October but are more intense early in the season. Thus climate change has increased the erosive power of the rain. The resulting topsoil loss is affecting agricultural production, while sediments reaching the river are reducing water quality and causing siltation of dams. The silt buildup reduces the storage capacity of reservoirs. A rst adaptation response is a greater emphasis on conservation farming such as contour seeding, crop rotation, conservation tillage, vegetative buffer zones, intercropping and reforestation. The management knowledge needed to protect watersheds is available. Understanding the links between ongoing seasonal climate change and threats to a watershed is the critical step for being able to adapt and mitigate impacts. 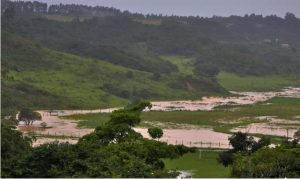 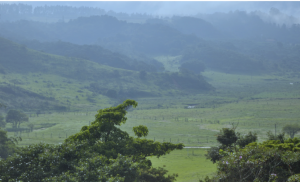 Even vegetated watersheds erode and ood under intensifying rains.

In tropical regions, the abundance of the mosquito Aedes aegypti, which transmits dengue fever, is determined by rainfall, with greater mosquito numbers under moist conditions. In Cuba, Puerto Rico and also in southeastern Brazil, the last decade has seen slight increases in rainfall during the dry season. These have contributed to the permanence of the mosquito population throughout the dry season, enhancing the risk of outbreaks of dengue throughout the year. With greater mosquito abundance at the beginning of the rains, subsequent population growth is also more likely to cause epidemics. As a result of this seasonal change, the once-a-year prevention campaigns for dengue now have been replaced by year-round vigilance, and still, the continent is experiencing an increase in dengue with greater mortality from the more severe hemorrhagic cases. Greater incidence in traditional dengue affected regions, together with warmer and moister seasons in neighbouring regions outside the tropics have caused dengue to spread there too.

The distribution of infectious diseases is linked to climate. Extreme rainfall and oods are known increase the incidence of water borne diseases. But more subtle changes in seasonality are now increasing the spread of disease, particularly insect-born diseases, in a sustained manner. In the face of changes in seasonality, countries must study those diseases that are subject to changes in climate to inform the design and implementation of timely and appropriate prevention and monitoring.

CHANGING SNOW MELT AND SPRING RAINS IMPACT RESERVOIR MANAGEMENT IN ARGENTINA
The Neuquén River in Southwestern Argentina is fed by snow melt from the Andes and a rainy season between April to August. However an increase in cool season temperature is causing greater ow during winter months and reducing snow storage. Higher river ow in the winter and more intense ow peaks mean greater ood risks.
A reservoir, planned 50 years ago on the basis of a runoff seasonality that no longer exists, regulates river flow and provides water storage for electricity generation. The economic management of the reservoir is geared to late spring and summer electricity demand of the national market.
To maximize electricity generation during these seasons, the original reservoir management is
to maximize storage during winter to have a full reservoir by mid-spring.

Under the slight changes in seasonality, a larger share of a reservoir’s capacity is now required to buffer ow peaks. Filling the reservoir to capacity by mid spring would decrease the buffer capacity and increase food risk downstream. The lower winter storage in the reservoir, needed to accommodate early flow peaks, is a serious challenge to power ge

neration in the summer when electricity consumption and prices are high.
An important dimension of seasonality is the relationship between weather and the availability of water. Changes in seasonality affect the timing and
amount of precipitation, runoff and streamflow, which translate into scarcity or excess relative to the historical spatial and temporal patterns. Adaptive water management strategies are necessary to optimize dam operation and reduce loss or damages. Future dam construction will have to consider potential changes as historical climate patterns no longer provide a reliable basis for planning.

Flexible planning and management are needed to adapt to changes in climate and seasonality: planning that integrates climate, hydrology, landuse disease, exible management that considers natural phenomena, legal and political issues across spatial and temporal scales, and develops responsive educational and communication strategies.