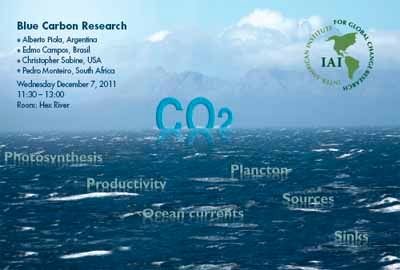 (click on the poster for a high res file)

In December 2011, the IAI hosted a side-event during COP-17 in Durban, South Africa on “Blue carbon research: biological, physical, chemical processes in oceanic carbon sinks and sources”. Based on IAI research in the South Atlantic, we discussed how ocean circulation affects blue carbon: the links between biological carbon sequestration, chemical absorption, physical transport and possible re-release to the atmosphere; and what this implies for carbon management options.
Press release (in English)

(from the press release)
The Ocean over the Patagonian continental shelf absorbs about 17 million metric tons of carbon per year, the equivalent to all the carbon content of 100 thousand hectares of rainforest, studies have revealed.

Although production fluxes in Patagonia and over other continental shelves are very large, such natural fluxes only become a factor in the mitigation of atmospheric carbon budgets if they change relative to their pre-industrial sizes. In fact, these natural fluxes are so large, that small changes can have a major impact on the scale of our emissions reduction targets. It is also critical to know for how long the CO2 is sequestered. The ocean is thought to be the ultimate long-term sink for as much as 90% of the human-derived carbon dioxide, but models still do not capture all of the important mechanisms or pathways for getting carbon into the deep ocean. “We are identifying the physical and biological mechanisms that control the exchanges of carbon dioxide between the ocean and the atmosphere”, says the lead scientist Alberto Piola of the Servicio de Hidrografia Naval in Argentina.

The open ocean and continental shelves are thought to be responsible for capturing about a quarter of the biological carbon in the world but very little is known about the subsequent fate of this carbon. Even though CO2 uptake over all the continental shelves is close to the uncertainty in the estimates of open ocean uptake, that comparison may well underestimate the importance of shelf systems whose effectiveness in carbon sequestration depends on an uncertain understanding of the proportion of shelf production that is exported off the shelf into the open ocean.“We are just beginning to understand how the physical processes over the Patagonian shelf control the ocean productivity and how the most productive shelf regions are responding to climate changes” says Piola.

The research team from Argentina, Brazil, Canada, Chile, the United States and Uruguay presented its findings at the UN Climate Change Conference in Durban.The Patagonian shelf break is one of the most important fisheries regions on earth, with a harvest of millions of tons of fish and squid per year. Overfishing disrupts the marine ecosystem’s food web and can affect the capture of carbon through phytoplankton photosynthesis.“The net ocean uptake of two billion metric tones of carbon per year is the difference between very large ocean absorption of carbon nearly balanced by a very large release of carbon. A change in the processes controlling that delicate balance could be a game changer when it comes to predicting future climate change”, adds Christopher Sabine, director of NOAA’s Pacific Marine Environmental Laboratory (PMEL), speaking about the importance of this study.The Patagonia continental shelf covers 1 million square kilometers, about 4% of the global continental margins with a net absorption of approximately 5% of the carbon absorbed on global continental margins.