The structure of the IAI 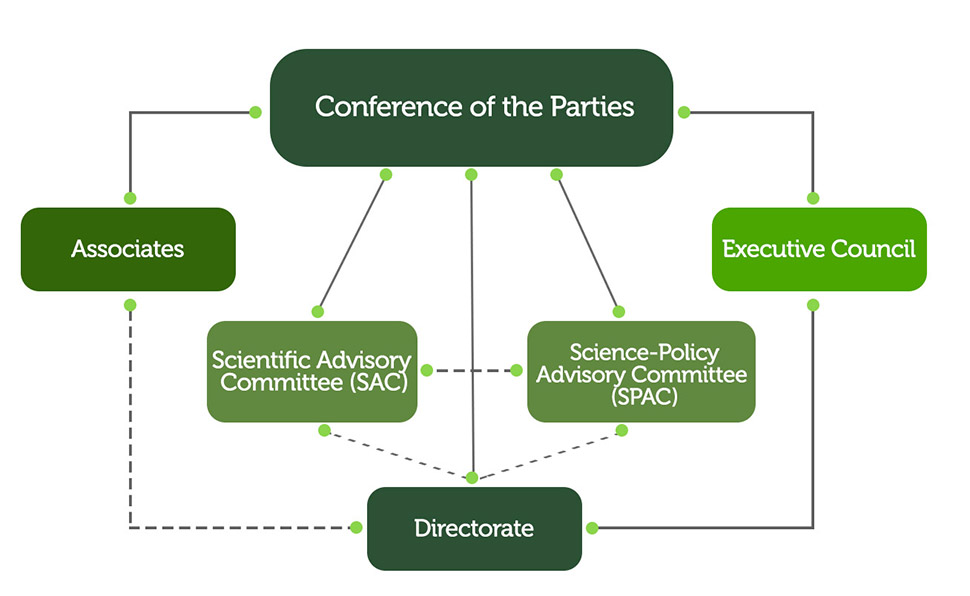 THE CONFERENCE OF THE PARTIES (COP)

The CoP comprises the 19 Parties in the Americas ratifying the Montevideo Agreement. As the IAI’s principal policymaking organ, it establishes, reviews, and updates the Institute’s policies and procedures and evaluates its work and accomplishments. It also reviews and approves the IAI’s Scientific Agenda, annual and long-range plans and financial budgets.

The SAC is composed of ten members elected by the Conference of the Parties for a three-year term. As the IAI’s principal scientific advisory body, it makes recommendations to the Conference of the Parties regarding the IAI’s Scientific Agenda, long-range plans, and annual program. It also directs the peer review system for evaluating scientific proposals and assesses the scientific results obtained from IAI’s funded science programs.

The SPAC was established by the CoP in 2013 to provide advice to the CoP and the IAI Directorate regarding the application and design of science in policy and decision making. The initial composition of the Committee was approved by the CoP in 2014. This group was in charge of drafting the terms of reference of the committee as well as any other rules needed for its function.

The IAI Directorate is based in Montevideo, Uruguay and is run by the Executive Director of the IAI, who is elected by the Conference of the Parties and is responsible for the IAI programs and operations.

Established in March 2012, AQUASEC is the first such IAI’s Research Center. See Decision XVIII/18: The CoP recognizes that the establishment of Centers of Excellence for Global Change Research is the fruit of the scientific efforts supported in the framework of IAI CRN and SGP-HD programs and endorses the establishment of the virtual Center for Water Security at University of Arizona and Pontificia Universidad Católica de Chile.

ASSOCIATES OF THE INSTITUTE

Associates of the IAI are:

An institution which submits a proposal for a specific research project, through the appropriate Party, may be designated by the Conference of the Parties as being affiliated to the Institute for the duration of the project. The Conference shall base its decision on a review of the proposal, taking into account the views of the Scientific Advisory Committee as to the scientific merit of the proposed project and its relevance to the objectives of the Institute.